Some hobby progress, some gaming pictures... 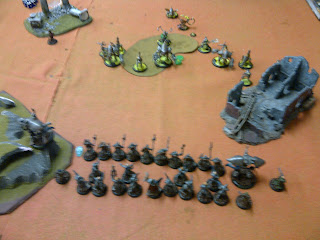 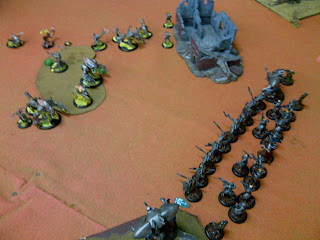 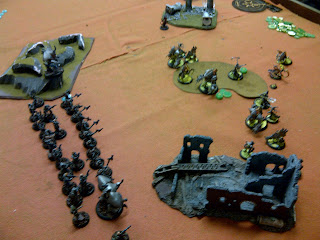 So, above are some blurry ass photos of my playing a game of Warmachine against one of my buddies who plays Cryx. Right after this picture was taken, he managed to assassinate my caster through judicious use of spells and a trample with his Seether. This was the second game I played on Saturday. The first was against an infantry-heavy Vindictus list. I lost both games. However, I still learned and had fun before I ran off to go out with my new girlfriend ;)

Anyways, the list I used both games was as follows:

Mainly, I wanted to try out the one heavy myrmidon that I hadn't used yet as well as the Halberdiers (which I had just finished) and one of the 'casters I hadn't used yet. I figured out a couple of things as I played. The first is that I generally like Vyros. He has 2 excellent spells, Inviolable Resolve (gives a unit +2 ARM and Fearless) which works well with any of the Dawnguard units or the Halberdiers and Mobility (+2 Speed and Pathfinder for his myrmidons). Vyros is also no slouch in combat. He single-handedly took on a Menoth 'jack and won. The Manticores are not my favorite myrmidon. They have a cool thing going with their covering fire and being the cheapest myrmidon currently available. However, they don't have the focus efficiency abilities of the Hydra or the resilience of the Phoenix, and they want loads of focus to be anything other than crap in close combat. I'm totally going to give them a few more tries, but I feel like I need something punchy in my lists...

Anyways, as for my hobby progress, I have quite a bit done now. For my Retribution army, I have most of it assembled and painted. Here's the list ;)

Now, I have my second Mage Hunter Assassin, 2 Soulless and Skeryth Issyen assembled. I have a second Magister and a second unit of Battle Mages and Stormfall Archers awaiting assembly, so I'm getting close to the point where I have to sit back and wait for new releases ;)

As for my Legion of Everblight stuff, that's coming along a bit more slowly. I have 20 points painted: Saeryn, Scythean, Angelius, 2 Shredders, a Forsaken and a Shepherd. I have some more stuff assembled and awaiting priming, but I need some more pieces before I really feel like I can start constructing functional armies that I want to play. I'd like to figure out a good way to push up to 35 with what I have that will be easy to get done, but I haven't gotten anything figured out yet. I've got 2 Carniveans, 2 Seraphs, 2 Teraphs, a Raek, 2 Shredders, 2 Stingers, Typhon, Sorceress on Hellion, 2 units of Striders with UA and 2 Deathstalkers sitting in waiting. I'd like some Swordsmen, Raptors, Legionnaires and maybe some Hex Hunters... Maybe I'm being overly ambitious? I dunno.

Beyond that, hopefully I should be making some additional posts this week. I got kind of behind when shit got crazy last week...
Posted by kennedy at 6:01 PM 3 comments: 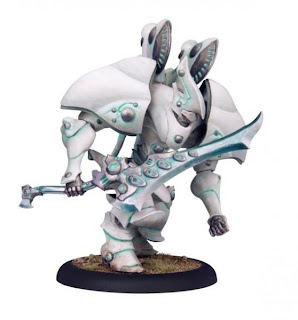 Well, it's been a rather unfortunately time since my last post. I'll go ahead and chalk that up to a couple of factors: 1) having to prepare for the holidays since they happened here this year, 2) having to hang out in the hospital after my grandfather broke his hip and 3) pure unadulterated laziness.

So, I haven't gotten a lot of blogging done, obviously, but have I gotten any gaming done? Yep, I have. If you even glanced at the picture, you'll probably correctly guess that I've been continuing to play Warmachine and Hordes.

My brain has finally adapted to the point where I think I'm starting to develop actual tactics and battle plans that work. I need to play a lot more games still and continue to re-read the rules so that I can have a high level of rules knowledge, but I'm out of the awkward stage that you enter into early in any game where you know enough to play but not enough to do well.

One major milestone for me was playing a 50 point game. Somebody asked me if I would, and I actually had enough stuff to be able to do so without having to just add in senseless filler. Really kind of awesome to realize I actually had that much stuff and its all painted. Contrary to what I'd heard, Warmachine isn't totally broken and unenjoyable at that points level... as long as you play scenario. I can see straight caster kill being really stupid at that high of a points level.

I've also really been focused on playing 1 caster for the moment: Adeptis Rahn Shyeel. After fiddling around with Ravyn and Kaelyssa, he's actually suited my playstyle best. So I'm working in getting half way competent with him before I start trying to really mix things up. I've kind of hit on what my "core" choices are for him at the moment as well. 2 Phoenixes are excellent with him, they're heavies that don't need that much focus to do damage and they're survivable arcnodes. A full unit of Sentinels with the officer and standard is also a must have for me. Rahn's spell Polarity Shield means they can't be charged by things in their front arc and their Defensive Line makes them ARM 17 against incoming fire. Not too shabby for letting me control when my forces will engage the enemy.

I've also started having some theories about how Retribution works. What I've found so far is that Retribution has plenty of good shooting and good close combat, so the best way to play them is as a mixture of both where your shooting hurts things early before you hit home with a few charges. However, Retribution also has a sneaky side in all of the Mage Hunter stuff, so you can also threaten from multiple angles and approaches. And that is the key to victory. You have to be able to put pressure on the opponent from all ranges and angles so that you can get the most out of your force. Now maybe that's all Warmachine factions, but I don't think so based on how many large synergistic bricks I've seen where things need to be clustered for buffs. Retribution's units and solos don't require the heavy supervision that other forces seem to, and that encourages a slightly different approach.

So, all that long winded rambling out of the way, I really enjoy the Retribution style. You can really vary your army from one game to the next simply by making a few different choices. I've heard other players claim that about other factions, but I've never seen such differences as I have with the Retribution.

As for painting progress... Well, I haven't gotten much done at all, recently, with the exception of painting up 20 points of Legion of Everblight as a test for the rest of my force. I'm hoping to get the remainder of my current Retribution stuff done soon so I can continue to play more with them while I start getting my Legion into a playable shape.

I've also had a couple of thoughts that are germinating into the third "Treating your hobby like a hobby," so I'll be writing that soon.

Anyways, I hope everyone had a good New Years and is off to a running start in 2012... I mean, we only have like 11 more months before space-time transitions into time-space, our pineal glands open to embrace the return of Lord Kromdor and the T-Virus ends the world just like the Mayans predicted ;)
Posted by kennedy at 11:12 AM 1 comment: