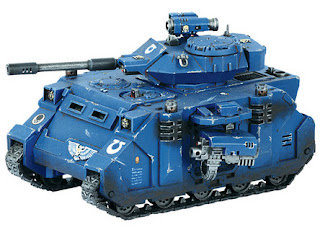 So, since I last wrote several things have happened. I have a new job, working in a factory, of all places. So, I quit my old job and started my new one. But, for a week, my jobs are overlapping... So, I'm working 75-80 hours this week.

This is awesome for my wallet and bad for my sanity. Fortunately, I gave myself something to look forward to. I bought myself a few more things to add to the 40k stable.

I ended up getting 2 Predators, 2 Helldrakes, 2 boxes of Raptors and my 3rd (and final) Storm Talon. So, yeah... I will be picking up more Raptors. The models rock really hard. They can be Assault Marines as loyalist or Raptors for CSM. The helmets fit well with my existing forces, meaning I don't need to buy any additional heads (good), and they add more special weapons to my bits box.

Ok. More than that will have to wait ;]

Also, I'm looking into an airbrush for ease of basecoating. Anyone have a suggestion? It will see quite a bit of use (due to the number of models I have), but once they're done, I won't be using it as much until I acquire new things. Also, any helpful links to airbrushing techniques would be vastly appreciated... Not that I'll have time to do any reading or painting or assembly or anything until next week ;]
Posted by kennedy at 3:51 PM