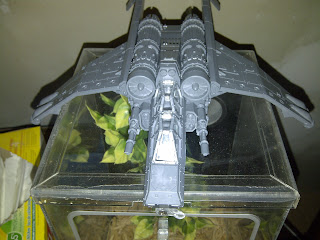 So, I know absolutely nothing about how well this new edition functions. Sure, I've read the rules, and I've scanned some various blog posts. But until I've actually played a game, I have no handle on how things actually flow.

Now, as of right now, that's not really so much of a problem.

Why is this? I'm trying to turn over a new leaf. Usually, I build pretty much a single list and play that (with a few modifications) for an entire edition. Then, when a new edition comes out, I have to build a new army because whatever I have ceases to be effective or fun or something. This time I want to do something different.

I've said before that I wanted to build a collection that has enough flexibility to weather editions and keep my attention. Unfortunately, I've never actually done so. This time, however, I'm actually setting out with that intent, so maybe it'll happen. Sure, I've written up a few army lists, but I haven't settled on one to the extent that I'm going to commit to just that. Instead, I've set myself up with a fairly set goal in terms of allies and then an unfortunately large shopping list of Space Marine items to give myself some flexibility.

What allies? For right now, Imperial Guard. They seem to shore up some of the weaknesses that any other list can have. Right now, I plan on the following with them: a company command with an autocannon, a veteran squad with an autocannon, a Vendetta and 2 Hydras. Cheap and solid shooty is what I think this gives me, along with a relatively immobile troops unit to camp home objectives.

As far as what I want in Marines... Well, lots of regular guys with an assortment of special and heavy weapons. I bought a bunch of Mark IV heads to give my guys some character. Several Razorbacks/Rhinos to provide whatever mobility I need. A couple of Dreadnoughts to give me some firepower (also, I love Dreadnoughts). Maybe some Assault Terminators? Yeah, that sounds fun. Also, I have some secret hidden plans that I'll only reveal once I've actually decided to do it, as it'll make for some nice modelling and painting entries.

So, there you have it, a bit of rambling on my part and a picture of my almost completely assembled Vendetta on top of my crested geckos' cage. Maybe I'll put out some better posts here in the near future as I get back into the swing. Heh. Maybe I'll even get around to reposting all of my older stuff that I haven't done yet. I suppose we'll see!
Posted by kennedy at 8:20 AM