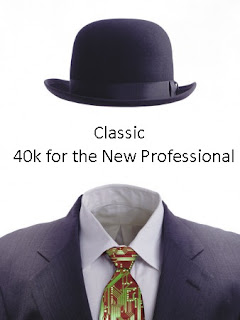 Well, this feeling ought to be familiar by now, it's nostalgia, and I'm feeling a lot of it lately. Having to look back through my old articles really gives me some interesting perspective. It's a kind of time-shift feeling. I'm not sure how else to put it.


For me, it's like those times when you would write yourself a letter that was supposed to be delivered to yourself a year later. I can see my old thoughts in a new way. Very strange indeed.


This is one of the articles from fair early on in the life of my blog that I really enjoyed writing and formed the core of my thoughts about things early on. I really enjoyed re-reading my own writing here, and it kinda got me pumped about the idea of some cool conversion projects that I mentioned in the article that were really just kind of made up off the cuff.

Ah, balance. Hard to achieve and difficult to maintain, both in 40k and life in general.

For the record, I think balance in 40k is only partially about the army list you run and how well it does against a variety of threats. I think that there are other balances that you have to achieve in the game.

"Now wait a minute here, damn it! You just told us that we need to be competitive and push for armies that make us force ourselves to play better."

Yes, yes I did. I am not saying that you should abandon that approach, not even a little. What I am saying is that you need to balance that with the other aspects of the game. What other aspects? The two that come to mind for me are fun and fluff. So, let's take a look at how we make a good (or at least pretty decent) army fun and "fluffy."

There are two good ways to get to "fun."

Now, the first point I'm going to make may not be well received some places. Super optimized lists are not always the most fun for some people. Now, I think that they should be (especially if both players are playing lists with similar optimization), but sometimes people want a list that can, as one of my friends used to put it, "just run up and punch you in the face." In that case, you may be forced to take a hit to effectiveness and tweak just enough to throw in one "fun" unit. Depending on your army this could be a lot of things. In Guard, maybe it's a squad of suicidal conscripts or a Leman Russ of Plasma Death. In Marines, maybe it's a biker command that just runs around and crushes stuff. Depending on what you're doing, these may not be optimal choices, but they can be fun.

The second way to get to fun is to make it yourself. Maybe your list is super optimized and you'd have it no other way. Fine. Great. You and I are on the same page. Now, how do we get to fun, if you don't want to compromise your efficiency? Do something interesting with the models or the paint job. Make up a cool back story for your commander. These kinds of things can serve to bring the game to life. For example, you're running super optimized mechguard. Competitive, powerful but not necessarily fun. So, decide that your commander is a Rogue Trader who was mistakenly given command of an Armored Company. Make his model all ragtag and toss in a few of his ship mates as the sergeants. Suddenly, your army is more "fun." You can blame those bad scatter rolls on the guys getting drunk on alien whiskey before the battle. Your commander made a few tactical errors because, "Damn it, Jim, I'm a Rogue Trader, not a commander!"

This leads me into my next point...

Honestly, the fluff in 40k is flexible. For just about any army you want to build, there is an army in the background that you can base your army on. Or, you can make up your own background.

With a competitive army, you may feel like you're throwing fluff to the wind and just building tanks. Well, you don't have to be. Take a look at your army, then go back and read some background material. Maybe something will jump out. For instance, you want to run Blood Angels, but everyone is running Blood Angels and you don't want to be just another clone. Ok, go to the background and look for some other assault chapter... Hmm... Well, there's the Black Dragons, they're good at assault and they have all these guys who grow bone spurs on their hands and heads. Well, a few shoulder pads and some bone spurs later and you have a good army that also shows off your fluff knowledge.

Or, say you don't want to run an army from the background. You can always base it off of a tv show or a movie. I'm currently making a Space Marine biker army based off the idea of space highway patrol seen through the lens of Super Troopers and Reno 911. Bam! Cool theme for a good army.

So, now that we've seen how balance works in 40k, how do we use it in real life?

Well, you can always set quotas for yourself and use those to get things done. For instance, you can say to yourself, "I won't read any 40k stuff today until I've done the dishes and vacuumed." This will help you balance real life and 40k by forcing you to do real life stuff.

See how that can help you to decide what needs to be done and do it?

If I think of anything else, I'll be back with more.

Here's where I draw the line and say: "This article was one of the ones that helped me establish style and tone." I think that the humor and general approach I took here was the start of something really excellent for my blog. I think that I'd finally managed to ditch the kind of high and mighty pompous attitude that I felt like I had before and replace it with something a bit more personal.


Overall, I think I did a damn good job exploring some of the ways in which I think about 40k. Plus, I think it's entertaining to read. Of course, I could be so wrong.