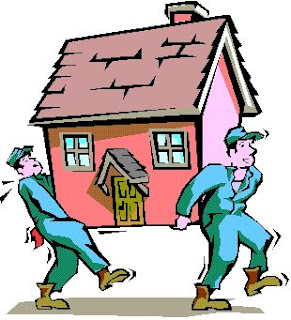 Ah, the joys of clip art. So, as the article title might suggest, I am indeed moving. Moving is right behind filling out forms and traffic jams in the list of things I hate very much in this world. Thus, I've been trying to avoid it as long as possible. Mainly by playing as many games of Malifaux and Dystopian Wars as I can.

So, yes, as a side note, I have indeed picked up Dystopian Wars and am slowly learning to play it. So far, it is a massive blast to play and I'm loving the aesthetic. I've picked up the Americans because of one simple reason: Paddlewheels. I thought about waiting for the Antarcticans, but the paddlewheeled battleships sold me on the Americans.

Anyways, on to the thrust of what I'm supposed to be writing about: Moving.

Moving, regardless of how far you're moving can be a stressful process. Having just gone through most of said stressful process, I think I can lay out some amusing tips about what not to do so your moving experience can be less stressful than mine has been.

1. Give yourself plenty of time

This is, I believe, key. You want to make sure that you can actually accomplish all the packing and additional activities associated with moving. If you don't, you may find yourself in a bit of a sticky situation. Trying to move from one place to another without enough time can be extremely difficult and frustrating.

One additional consideration is emergencies. I budgeted myself about 2 weeks for moving, but due to things beyond my control, that time was cut down to about 5 days. Let me just tell you that you don't want to find yourself trying to make all the arrangements to move much quicker than you'd like with no notice. You'll be lucky to find anyone who can help you.

2. Make sure you have a deadline

While this may seem contrary to the previous point, it's really not. Just as you want to make sure you have enough time, you also want to make sure you don't give yourself too much time. Allowing for longer than necessary is useful, but giving yourself way too much time can lead to procrastination. You should try and avoid that, or else you'll end up with no time left and lots to move.

Right here is why I'm generally bad at moving. I'm about as organized as a dust storm. My entire life is lived in near constant chaos. Not necessarily my actions, but my environment. I'm not a tidy person, and moving requires you to tidy up, pack things into boxes and shift them from one place to another. I never tidy up. Thus, I end up throwing things randomly into boxes before stuffing said boxes into a truck and hauling it off to try and sort the whole lot of it out. Not pleasant.

Thus, you'll want to avoid my example and get yourself well sorted out before you move. It's harder than it seems, especially if you collect anything. You always end up with way more stuff than you bargained for.

4. Have plenty of help

When I was in college, I was able to move most of what I owned by cramming it as hard as I could into a Honda Civic two-door. Those days are over. I now own furniture. Furniture! Thus, I can't move everything I own by myself any longer, nor can I cram it all into a small car.

If you're trying to move big, heavy things, having other people to help is key. I managed to con my buddy Justin into helping me move, and that has thankfully taken some of the frustration out of trying to get my big pieces of furniture moved. I shudder to think what would have happened if I'd tried to move a couch down from the second story all by myself.

I've not got much more than that to add on the subject to be honest. Mainly, I'm typing this up as an excuse to stop packing for a few minutes. Unfortunately, that time draws to a close, and I have to start working again ;)
Posted by kennedy at 5:09 PM