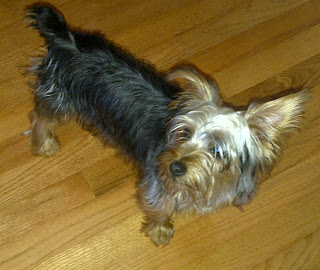 So, having set myself on a course to re-enter the hobby as smoothly and quickly as possible, I made my way to my local hobby store to purchase the few remaining necessaries left for me before I can field what I would call a proper Dark Eldar army.

Then, I sat down to build with my trusty new dog at my side. "What dog?" you might ask. Well, that dog in the picture is now mine. Her name is Soph, and she dutifully watched me construct some Dark Eldar. Only once taking the time to attempt to snack on a Phantasm Grenade launcher before I swiftly disabused her of the notion (I did this by screaming like a girl and becoming frantic before I realized she hadn't swallowed any of it).

Now, because of my local hobby store's stock, I ended up one Venom short of what I wanted. Thus, I fiddled around with the list a bit more until I came up with this:

6x 5 Warriors with a Blaster riding in a Raider

So, still relatively close to what I originally outlined.

What's cool about this list, in my opinion, is that it gets lots of hitty (Bloodbrides, Incubi, Beasts) without losing too many Lances. Lances suck, but they're basically all we get as Dark Eldar, so I need enough to crack vehicles so I don't just end up banging on the outside with my Bloodbrides screaming "Let us in! We want to kill you. Maybe. In like 3-4 full turns. If we don't roll shit for our dodge saves!" I get 8 Lance shots from Raiders, 6 from Blasters and 9 from Ravagers. So, 23 shots total at 17 different targets, possibly. Not bad. Not great, but not bad.

What's really awesome is that I totally did not shell out the retarded amount for Beasts that GW seems to believe that we gamers will. I bought a box of Chaos Warhounds and a box of Vampire Count undead dog things (Yeah, I didn't read the box so much as look at the pictures and go "Ooh! Nightmarish! Win."), so my Beast squads will be composed of those and some repurposed Hellions.

Now, what's gonna suck? All my anti-infantry is really in my Bloodbrides and Beasts. I can get all of my Warriors together and put a hurt on a unit, and my lone Venom MIGHT do something. So, against Orks, I'm kinda in trouble. Meh. A risk I'm willing to take. Also, I have only 30 scoring bodies with T3 and a 5+ save. Yeah, that probably will suck, but I just can't convince myself to care that much ;)

Also, I totally decided that I love the Lhamaean model. Thus, I have bought one and she will be my Archon. Seriously. I know people dissed the model when it came out because the pose is static, but I think she looks quite regal. Therefore, I decided that she will reign supreme over my Kabal of the Broken Heart as a former prostitute who rose to concubine and eventually Archon. This should also give some sort of reason (beyond my simple preferences) for why something like 75% of my Dark Eldar models ended up being female. Yeah.

Anyways, I'll be trying to get in a game or so tomorrow, so hopefully I'll get a game, some pictures and some amusement ;)
Posted by kennedy at 8:48 PM