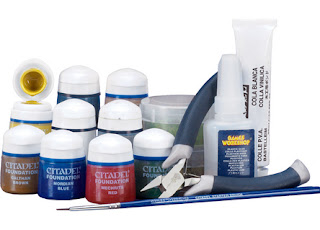 Caution: This post may be filled with introspection. Tread carefully ;)

Sometimes, especially after I take a break from gaming for a while, I come back with a different perspective on the whole thing and some new kind of enlightenment about how I want to pursue this hobby. This blog is the result of one such revelation. Sadly, this article is not.

I have recently found myself thinking quite a bit about the hobby and my place in it and the enjoyment I derive from it... or sometimes the lack thereof.

And there's where I find myself with a bit of a sticking point. Hobbies are pretty much supposed to be fun. Sure, sometimes the things you do start to feel a bit like work (like when you're on Guardsman/Ork/Termagant #20 of 200), but overall the purpose of a hobby is enjoyment. At least that's what I've always kind of been told and assumed.

So why is it that I (and many others) can get so very serious and so very upset about aspects of the hobby? Why have I seen so many people throw down dice or models and walk away from a table with a grimace on their face and blood pressure rising? And (most of all) why the hell is this so damn normal that we don't freak out about it more?

Part of the equation I can almost immediately explain. We get invested in our hobbies. And when we get so invested in something, it decidedly has the potential to play with your emotions. I mean, hell, I was super pissed when I read the new Sisters of Battle White Dwarfing. I got frustrated when Grey Knights came out right after my beloved Dark Eldar and made mockery of all I hold dear. I've even gotten irritable a few times in casual games!

Yeah. Hobbies are something that we do for enjoyment, something that we invest a lot of ourselves into. That, then creates the potential for anger and disappointment when things don't work out the way that we'd like.

Now, that's kind of the thing that feels weird to me. Why do we continue to gripe and moan and be miserable dealing with the aspects of the hobby that make us upset? Why in the hell aren't we a bit more proactive in trying to find some enjoyment in the hobby? I mean, tabletop gamers as a group tend to be able to really pull off some amazing shit when you think about it. In order to play a game, we spend possibly hundreds of hours constructing and painting an army. Then, of course, there's the time we spend learning the rules and building terrain and doing all the other stuff necessary to make that game happen. Yet somehow we just can't figure out a way to deal with the aspects of our hobby that we dislike other than compulsively bitching?

Sure, for some, complaining is just something they enjoy. Yeah, you know that dude, the one who swears that everything was better back in the early 90s when everything was metal and awful looking and reading the rules was like deciphering a puzzle with no solution made by a masochistic madman ;) We've all met the kind, I'm sure. For the rest of us, however, I just have to wonder why we feel so compelled to rant and vent and get upset about things which we fundamentally have little to no impact over. Especially those of us who play Games Workshop games. By now, we all should have learned that GW listens to no one, and GW listens to its fans least of all.

Part of this is coming from the point of view where I'm walking back after a break and going "I want to put together and play the army I want rather than just one that wins." For me, that army is Dark Eldar. I want to get the pieces painted and set up and be able to admire the work that I've done. I find, however, that I have little desire to play them. It's one of those things where I just realize that, especially in a competitive setting, the Dark Eldar list that I like, that I think is cool is not very good. And that just frustrates me.

So, really, I'm kind of asking a rhetorical question: How can I treat my hobby like a hobby? By that, I mean, how can I maximize the enjoyment that I get from it and minimize the frustration, anxiety and anger that I tend to feel when I get deeply engrossed? I'm not sure, really.

I've got some ideas about what I can do and how I can do it. I plan on writing them up in the near future as a part of my return to blogging on a semi-regular basis. I intend this as kind of the intro, the warm up. I'm not sure if I have real solutions or not, but I think I have some thoughts that I can really turn into something decent in writing form. Regardless, I've rambled on enough for now, so this is the end of this part ;)

Hobby time notes: This doesn't really fit with the article and it doesn't merit its own post, but I thought I'd stick in a fun note about my actual hobby progress. I have 90% of the Warmachine stuff I've bought recently assembled and based. I'm trying to get quite a bit of it painted up for a local tournament this coming Saturday. I plan to crash and burn in the tournament, but I hope it'll help me get a few games in and get me off the ground running with the system again. Theoretically, I should have some pictures to post of painted stuff soon... Provided my damn cord quits hiding from me! ;)
Posted by kennedy at 7:46 PM