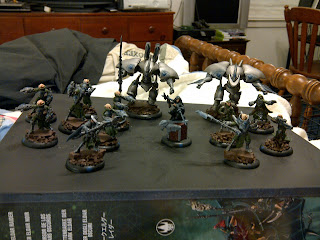 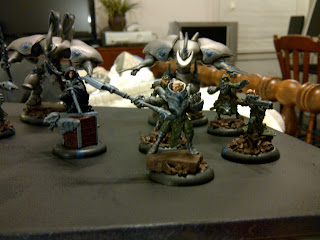 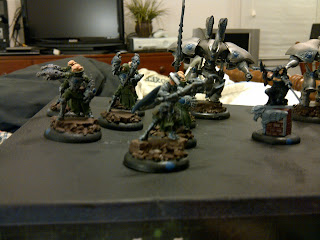 Ok, so here's a look at most of my painted Retribution of Scyrah force so far. Those of you familiar with Warmachine may recognize the Phoenix Heavy Myrmidon alongside Discordia the character Heavy Myrmidon lead by Warcasters Ravyn the Eternal Light and Master Arcanist Rahn Shyeel and accompanied by a squad of House Shyeel Battle Mages, a Magister, an Arcanist, a Ghost Sniper and Eiryss the Angel of Retribution. For those of you not familiar with Warmachine, just smile at the pretty pictures (and lament that I should have a light box by now but don't...) ;)

Unlike the last time I got into Warmachine, I have a strategy for my purchases. I like to have all the Warcasters/Warlocks available to my faction. Even if I don't like to play with them, most of them are decent enough models that I don't mind owning and painting them. I want to have one of each of the available light 'jacks and at least one of each of the heavy 'jacks (although here, I'm looking at Discordia, 2 Phoenixes, 2 Hydra/Manticore magna-jacks and then the Huse Vyre stuff when it comes out). I'd also like to have a single copy of most of the units (I actually like the look of the units in this faction after hating the look of infantry in WM/H in general) with their UA and 2 of most of the solos. I'd consider multiples of the smaller units like the Mages and Archers, but with bigger units I just don't see myself ever fielding more than one of any of them, really.

Anyways, that's all just so many words into the wind. Who knows what I'll really do, since I'm enjoying the hell out of painting some elves and I've got several months of bar study ahead...

So, right now, I've got a couple of lists as possibilities for this weekend. Both that I will put here are lead by Ravyn, as I think she's relatively easy to understand compared to some of the other casters. I may work on a Kaelyssa list or two if I get everything else I want painted done and have time to knock her out as well.

Ravyn, Eternal Light (*6pts)
* Manticore (8pts)
* Phoenix (10pts)
* Sylys Wyshnalyrr, the Seeker (2pts)
Mage Hunter Strikeforce (Leader and 9 Grunts) (8pts)
* Mage Hunter Commander (2pts)
Stormfall Archers (Leader and 3 Grunts) (5pts)
Arcanist (1pts)
Eiryss, Angel of Retribution (3pts)
Ghost Sniper (2pts)
So far, I've found the Retribution lights to be less than compelling while the heavies are nice but seemingly not terribly durable. The units seem solid, so I have been featuring them heavily in my lists. Retribution seems to lean less heavily on the synergy factor than other armies. Stuff tends to be fairly self-sufficient, although it can always be buffed by spells to be made better, of course.
Anyways, I don't know if any of my readers (beyond Von, of course) have any Warmachine (specifically Retribution) experience, so I have no idea if anyone will take a look at these lists for a "Yay" or "Nay." Still, I plan to continue to tinker and rummage through the Privateer Press forums (despite the crapshoot that all forums can be).
Yeah. Ok. Now I've got to finish some more elfs and continue to coalesce my thoughts for more thoughtful articles ;)
Posted by kennedy at 5:00 PM